What follows is my Op-Ed piece in today's Orlando Sentinel.  Enjoy... 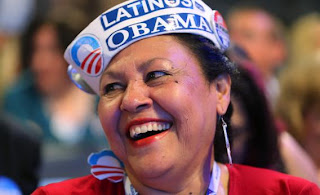 As a registered Libertarian, I do not often find myself voting for Republicans in presidential races. I do, though, often scratch my head and wonder why the Republican Party seems determined to arrive on the political endangered-species list.

I will confess that on Tuesday, for the first time in 12 years, I voted for the GOP to run the country. I am, after all, a free-market economist, and President Obama has not represented anything close to a belief in, or understanding of, simple freshman-level economics.

What Obama does understand — all too clearly — is that America has changed, and with it, the political landscape. The president perfectly unfolded an even larger tent to cover the folks the Republicans scare away.

Let's look at it.

First and foremost, there is the idiotic stance Republicans have taken on the issue of immigration. When will they ever learn how to do math? It is simple. Hispanics now make up 13 percent of the country and, for the first time ever, accounted for 10 percent of the voters.

The GOP keeps thinking, "OK, Hispanics are largely family-oriented Catholics who oppose abortion, so we should be attractive to them."

No, Hispanics are human beings who want jobs and opportunities to take care of their families. They have decided that they cannot do this in their native lands, so they rationally head for America — legally and illegally.

When Hispanics see how mean-spirited many Republicans and tea party folks are about their arrival in America, they naturally conclude that the Democrats will create a more favorable environment from which they can economically flourish.

Second, America has changed socially faster than Republicans can comprehend.

The country cares less and less about gay people getting married. Americans are not that bent out of shape over children born to single mothers. Abortion rights are popular as is the notion of legalized marijuana.

Moreover, when Republicans scream about national defense, the nation largely yawns. In essence, the voters told Republicans, "Osama is dead, and we aren't too concerned about the safety of Israel, but we do not have a job."

Finally, there is the long-awaited arrival of what we economists call the tipping point. The fiscal tipping point is when 50 percent of a population no longer pays income taxes, and 50 percent receive some form of taxpayer benefits every month.

Once a nation arrives at those key points, it becomes virtually impossible to get people excited about tax cuts or spending reductions.

We are now at the famous 47 percent mark on taxes and just more than 44 percent of Americans receive money from the forced confiscation of other people's money.

Yet, with all of this in front of them, Mitt Romney and other Republicans continued to talk about the self-deportation of Hispanics, the threat we face from Iran and tax cuts.

It is time for members of the Grand Old Party to wake up and embrace another concept they hate: That is Darwin's theory of evolution.

The political ecosystem has radically changed in our nation. If conservatives do not adapt to this change, they will face extinction in election after election.

Toward that end, I suggest some simple, common-sense modifications to their platform. Embrace immigration, shy away from radical proposals to the social-welfare network, and stop talking so much about social issues. This will be hard for them, I know.

Losing elections is harder. Isn't it?
Posted by Jack Chambless at 2:31 AM