Would America be better off if we became Norway? 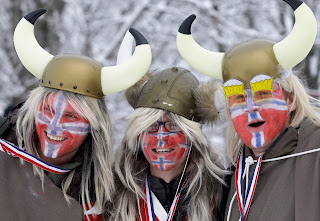 Sorry for the long delay in posting anything.  I have been busy living in denial since last November and have not felt inspired to write much.  Here is my latest Op-Ed from The Orlando Sentinel.

Should America aspire to become Norway?


According to economists who now study factors that determine human happiness, Norway is now the happiest place in the world.   The 2017 World Happiness Report says so.  It also says that America has fallen to 14th place.


For the past several years, economists have moved into a new realm of economic studies that focus on factors beyond income, wealth, consumer spending and the gross domestic product.    Now, my discipline has shifted to questions surrounding perceptions of mutual trust, shared purpose, generosity and the degree to which nations have good governance.


Somewhere Bernie Sanders is saying, “See, I told you so”.


But before we all start packing our bags for this perceived Scandinavian utopia, it might be instructive to look a little deeper at what is happening in Norway and whether we could pull off the same model in the United States.


First, it is important for people to also look at Norway’s overall level of economic freedom.


The Heritage Foundation annually ranks countries, based on several criteria, to come up with a list of nations that are free, mostly free, moderately free, mostly unfree and repressed.


For 2017 Norway ranks 25th in the world.  The United States sits at 17th – the lowest ranking in the history of this list.


However, when we look deeper at Norway we find that in the area of protection of private property rights Norway scores far higher than the United States.  Norway also outranks the U.S. in business freedom (the ease of starting a business the amount of regulations faced), government integrity and trade freedom.


It is somewhat paradoxical that most American see Norway as a quasi-Socialistic state.  Yet, citizens of Norway have more economic freedom than Americans in many key areas that play into the happiness index as well.


When it comes to tax burdens and government spending the United States has more economic freedom than Norway.    The effective tax rate paid by the average American is 26 percent.  In Norway it is 39.1 percent.


Moreover, government spending on the social welfare network is much larger in Norway – and in other Scandinavian nations – than in the United States.


Herein lies the question for Americans:


If Norway is a relatively free nation with few restrictions on trade, low levels of government corruption, fewer eminent domain takings of property and greater business freedom, would it make sense for America to follow Norway’s lead in those areas, while at the same time, raise taxes on the wealthy and provide a larger social welfare network?  Wouldn’t we be happier then?


After all, as I tell my students every semester, Norwegians voted for their tax rates and level of welfare.  This system of high taxes and generous benefits was not imposed on them and they can always leave for Hong Kong, Australia or other freer nations if they feel they are being taxed too much.


Meanwhile, in America we have witnessed more and more crony capitalism, skyrocketing levels of government regulations, takings of property by corporations and sports team owners in direct violation of the “public use” standard for eminent domain and choking occupational licensing procedures that keep poor people from competing with entrenched corporations.


Yet, there is one rarely mentioned dilemma that we would face if we tried to imitate the Norwegian model.


That is the fact that Norway is a nation of 5 million relatively homogenous people.    It is much easier to have a common view of shared sacrifice, community spirit, mutual purpose and generosity when there is so little cultural asymmetry.     Anthropologically speaking, it would be impossible to pull off what Norway has achieved in a country as politically and culturally diverse as America.   We can barely get two people to agree on a subset of shared values much less 320 million.


Finally, and no less significantly, is the fact that America has a higher crime rate, greater obesity levels and much lower educational achievement than Norway.    Therefore, expanding the social welfare network to model Norway would be far more expensive, and our tax rates much higher.


So, while we have much to admire about our friends across the Atlantic, it might be best to hope that America returns to our higher levels of economic freedom than to ever expect to be as friendly and socially responsible as they are.